In a previous life, I was the founder of Serene Audio. Where we made the best compact desktop speakers. Part of what made the speakers so great was their built-in amplifier that I designed. It had a DSP chip which allowed me to tune the amplifier to the specific properties of the transducers and their enclosure. We decided to shut Serene Audio down last year. It was a difficult decision, but that's another story.

I decided to open the design of the amplifier for the benefit of the DIY audio community. I have attached all the gerber files, but also the DipTrace schematics, layout, and BOM files. DipTrace is the software that I used, and I highly recommend it. It is very user-friendly, but also affordable. You can use it to a modify and adapt the design for your own needs.

We have been through 4 iterations of this design. So most of the kinks are ironed out, but there are some things to consider. First, this uses a digital amplifier chip (TAS5708), and EMI is a concern with D class amps. I have not done any EMI testing, however I have paid close attention to controlling EMI in circuit and layout design. 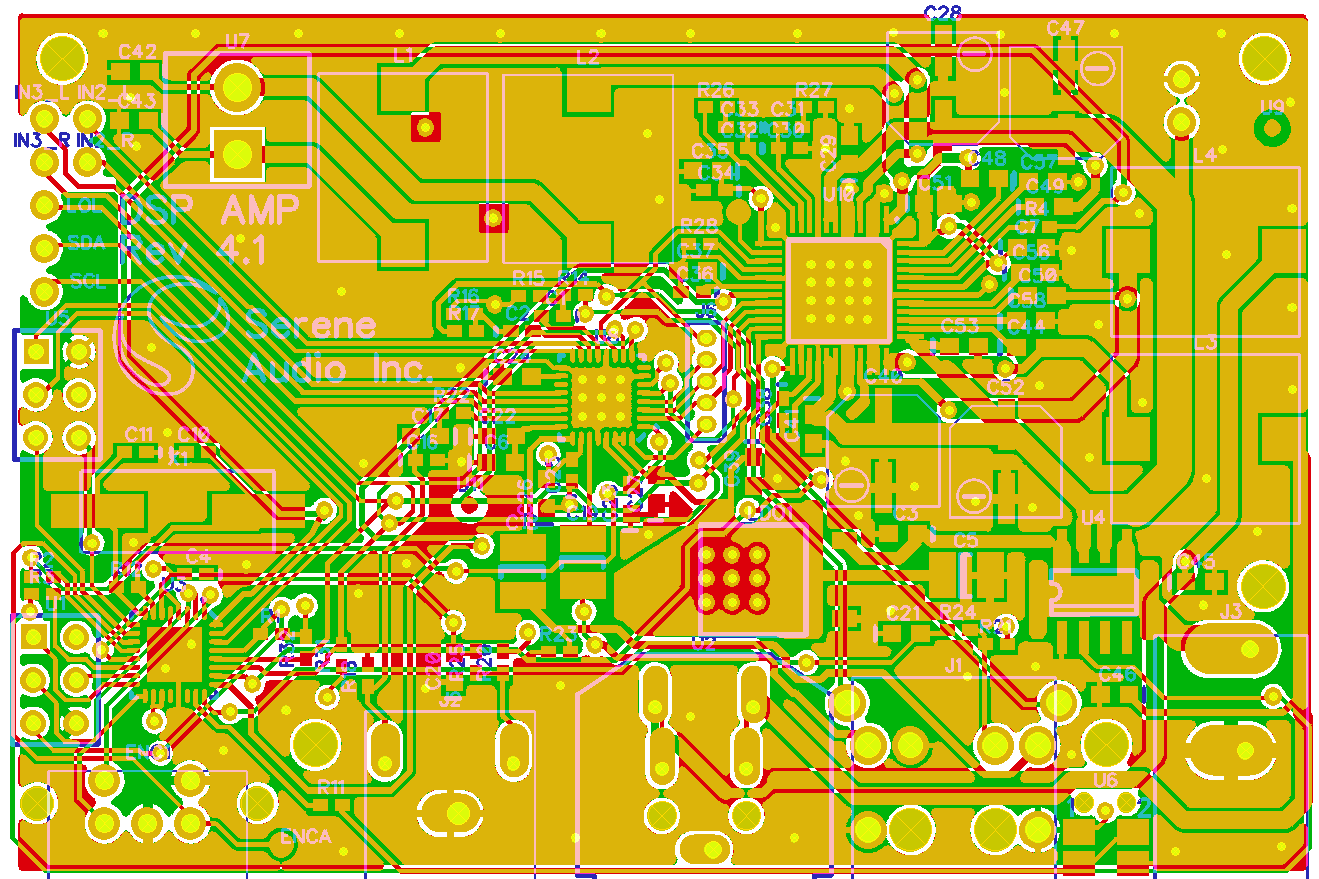 The layout is a 4 layer board. Where 2 middle layers are ground & 3.3V, and the top & bottom layers are signal layers. I have paid close attention to the return paths of currents to avoid EMI, but I've also tried to isolate the analog and digital return paths to improve SNR. Some of the features are:

The main components of the circuit are:

The MCU holds the configuration for both PCM3070 and TAS5708. It communicates with these chips through I2C interface. It also interfaces with the digital encoder and switch that acts as volume knob and power button. The subwoofer output also has a built-in switch, using which, the MCU detects when a subwoofer cable is plugged in and then activates a high-pass filter in PCM3070.

What makes the amp really useful is its programmability. All the DSP coefficients and configurations are stored on the MCU itself. The MCU can be programmed using an Atmel AVR ISP mk2 through the header right behind the encoder. I used the Arduino platform for developing the firmware. Here is a link the Github repo of the firmware. The firmware consists of for files:

Texas instruments offers a drag and drop graphical UI that makes programming PCM3070 significantly easier. It is called PurePath Studio. You can download it for free from their website. You can use this software to configure the DSP to your heart's content to make your speakers really shine. The contents of main_Rate48_pps_driver.h are directly copied over from a file generated by PurePath Studio by the same name.
Note: When copying over the data, make sure you add the PROGMEM modifier. It directs the compiler to store the values in flash memory instead of SRAM.

I have some PCBs left over from our last batch. I can mail you one for free, just shoot me an email if you want one. To make your own, you'll have to order your own components and solder paste stensil. Then manually place the components after applying the paste, and bake. It is a very delicate process, but I had success on my first try.

Let me know in the comments if you have any questions or if there is anything I missed.